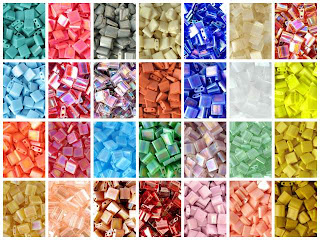 Here’s some information regarding delays in shipments of Miyuki Tila Beads & DuraCoat orders from a1BeadsBeadArtJewelrySupplies :

New! Miyuki Japanese Tila Seed Beads 30 Colors
I was just informed that all Miyuki Duracoat & Tila bead orders were delayed due to not just an overwhelming demand, but also because Miyuki detected quality issues on the beads when they were well into production –  about 3-4 weeks.
Once the quality issues were resolved they had to restart production; as a result all promised delivery dates were not only extended 4 – 6 weeks, but quantities were limited in shipments to those authorized to sell Miyuki products here in the United States and who ultimately I purchase from.
I apologize for the delay but will say from the sample card I received the beads are BEAUTIFUL and worth the wait – BTW … expected ship dates from my supplier is around the last week in September.
Free Shipping was to end September 1, but due to not only the number of orders I’m receiving, but the delay from Miyuki the offer is extended until September 31, 2010.
Posted by The Bead Stylist at Monday, August 30, 2010 No comments:

It’s certainly not your retail black Friday event – however, there are several BOGO deals available - but it’s about the colors I chose for the front page of my Artfire shop for the next few days or so.

Over the last several weeks I’ve been taking pictures of all of my beads – in a freak accident I deleted two of my major photo albums which caused panic to set in and so I haven’t been focusing on much of anything else but retaking pictures of beads - I’m not quite half-way there, but it is nice to see progress; and apparently people that are looking at the new pics have an opinion too as I’ve had more sales in two weeks on this selling venue Artfire than I’ve had I think since I started selling there.

Actually, I kind of felt a bit insulted, well more like embarrassed, I thought ‘were my pictures that bad people were looking at them and just passing them by…’ anyway, true to my nature no matter how difficult or challenging things may appear initially there’s ALWAYS something positive to gain from the experience.

I’m way behind schedule for what I thought I had planned to accomplish for this month of August, but

I sense a new plan forming.

Anyway, here’s to hoping you like my Artfire gallery front page – you’ll clearly see why I’m calling it Black Friday.

The Bead Stylist: Simplifying The Art of Beading

Promote Your Page Too